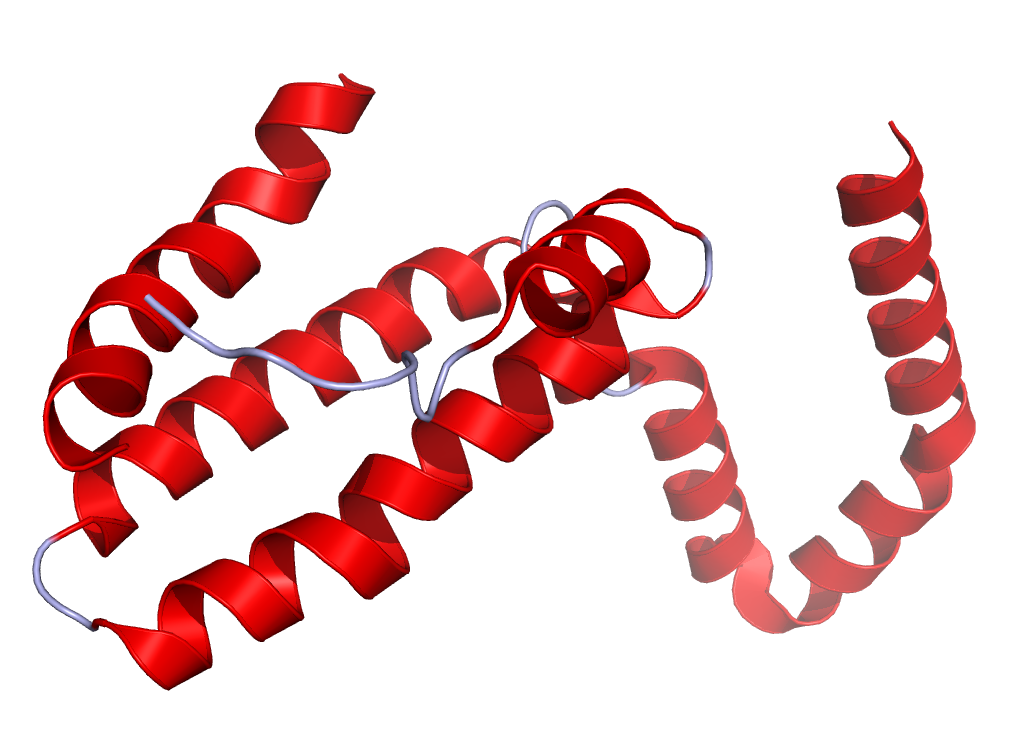 Interleukin 10 (IL-10), also known as human cytokine synthesis inhibitory factor (CSIF),  is a cytokine encoded by the IL-10 gene in humans, located on chromosome 1. The protein has a length of 178 amino acids and functions as a homodimer.

Figure The figure on the right side shows a structure of IL-10 created using the data from Protein Data Bank (PDB: 2H24) and rendered using PyMOL.

IL-10 was discovered in 1991 and was initially reported to suppress cytokine secretion, antigen presentation and CD4+ T cell activation. Further investigation has shown that IL-10 has multiple pleiotropic effects in immunoregulation and inflammation. It inhibits the capacity of monocytes and macrophages to present antigen to T cells via down-regulation of major histocompatibility complex (MHC) class II antigens and of costimulatory molecules such as CD80 (B7.1) and CD86 (B7.2). In addition, IL-10 was shown to inhibit the expression of IL-1, IL-6, IL-8, IL-12 and tumor necrosis factor–alpha (TNF-α) by these cells. In B cells, IL-10 prevents apoptosis, enhances cell proliferation and has a role in immunoglobulin (Ig) class switching. IL-10 has been classified as a class-2 cytokine also comprising the cytokines IL-19, IL-20, IL-22, IL-24, IL-26, the interferons and interferon-like molecules as limitin, IL-28A, IL-28B and IL-29. Initial experiments revealed that IL-10 is primarily expressed by monocytes/macrophages and to a lesser extent by certain subsets of activated T cells (Th1, Th2, Th17 CD4+) and B cells. More recently it was shown that almost all cells of both the innate and adaptive arms of the immune system are able to express IL-10, including dendritic cells (DC), mast cells, natural killer cells (NK), eosinophils, neutrophils and CD8+ T cells. Under normal conditions, the expression of IL-10 is minimal and upregulation seems to require triggering by products of bacteria or other pathogens. The biological activity of IL-10 is mediated by the IL-10 receptor (IL-10R), which consists of two IL-10 receptor 1 (IL-10R1) and two IL-10 receptor 2 (IL-10R2) proteins. Binding of IL-10 to IL-10R1 induces STAT3 signalling via the phosphorylation of the cytoplasmic tails of receptor 1 and 2 by JAK1 and Tyk2, respectively. IL-10R2 contributes little to IL-10-binding; its principal function seems to be recruitment of Tyk2 into the signaling complex. In line with this mechanism is that activation of monocytes is associated with up regulation of cell surface IL-10R1 and not IL-10R2 consistent with a role for IL-10 as an inhibitory factor for these cells.