The interleukin 1 family of cytokines consists of 11 members that participate in the regulation of immune responses, inflammation and haematopoiesis. The best-studied members are IL-1α, IL-1β and the receptor antagonist IL-1RA. IL-1RA is a specific inhibitor of the activity of both IL-1α and IL-1β, whereas other members of the IL-1 family (such as IL-1F5 and IL-1F7) appear to function as nonspecific inhibitors of inflammation and the innate immune response. Another member of the IL-1 family is the IL-18 binding protein (IL-18BP), a naturally occurring inhibitor of IL-18 activity.

The most recent addition to the IL-1 family is IL-1F11 (IL-33). IL-33 is the ligand for the former orphan receptor ST2. IL-33 plays a role in mast cell functions and drives allergic and Th2 responses. Similar to IL-1α, IL-33 can act via its specific cell surface receptor (ST2), however, similar to IL-1α, IL-33 is an intracellular cytokine and can function as a DNA-binding nuclear factor. IL-1F7 also is found in the nucleus and may act as a nuclear factor.

Two types of IL-1 receptor, each with three extracellular immunoglobulin (Ig)-like domains have been found designated type I and type II receptors The receptors both exist in transmembrane (TM) and soluble forms: the soluble IL-1 receptor is thought to be post-translationally derived from cleavage of the extracellular portion of the membrane receptors. Both IL-1 receptors appear to map to the same chromosomal location and bind all three forms of IL-1 (IL-1α, IL-1β and IL-1RA).

Unlike other cytokine families, the IL-1 family controls inflammation at both the receptor and nuclear levels. Members of the IL-1 family of receptors contain activators and suppressors of inflammation. For example, the IL-1 type II receptor (IL-1RII) functions as a decoy receptor whereas IL-18BP is the high-affinity endogenous neutralizer of IL-18 activity. 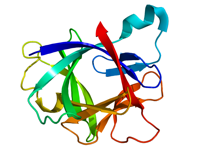 The crystal structures of IL-1α and IL-1β have been solved, showing them to share the same 12-stranded beta-sheet structure as both the heparin binding growth factors and the Kunitz-type soybean trypsin inhibitors. The beta-sheets are arranged in 3 similar lobes around a central axis, 6 strands forming an anti-parallel beta-barrel. Several regions, especially the loop between strands 4 and 5, have been implicated in receptor binding.

Figure This is a structure of IL-1β created using the data from Protein Data Bank (PDB: 31BI) and rendered using PyMOL.